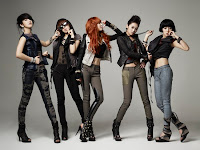 4minute has changed. They haven't only changed their looks. On stage, the 5 girls have already turned into ladies. Their charisma is strong as ever.

"We display each personality in a chic and sophisticated manner. Instead of an innocent and lovely appearance, I have to show off grace"(Nam Jihyun). At what the leader, Jihyun, said, the members unanimously added "the fans say that she's a goddess". At this, Jihyun just smiled as she was embarrassed.

Heo Gayoon, who caught the attention for her ‘masterpiece figure’ went on a diet for the preparations of this album. In their recently-released BTS clip of the photoshoot for their jacket pictures, Gayoon revealed her secret : "I only ate chicken breast. I also worked out strenuously and practiced the choreography.

"On the whole , we shaped our body lines rather than slimming. A lot of pictures of girl groups members’ small waistlines came up. We felt pressured. Even if we thought we could lose weight by just practicing the choreography, the truth was that the body wouldn’t adjust itself. The unnies went on a diet and after studying us, Sohyun joined us not eating.”

Nicknamed ‘Junglass’ among fans, Jeon Jiyoon sticked to a short haircut. However, she dyed her hair for the first time. Somehow, Jeon Jiyoon became an epitome with her boyish image rather than with a lovely one. Were not there times you had thought ‘I want to look feminine’?

"I had wanted to appeal for a feminine beauty. I tried to let my hair grow longer to try something new, yet a personality with ‘force’ suits me well.” (Jeon Jiyoon)

"Jiyoon acts cute a lot offstage. She’s just the opposite on stage. She also laughs a lot. When we consider it, we think that she’s feminine compared to ‘Hot Issue’ and ‘Muzik’ eras. Everyone says “she’s really pretty”. In comparison to the past, she’s smeared with feminine charms rather than boyish charms.”


This title track ‘HUH’ (Ha !, Hit yoUr Heart) is also a Shinsadong Tiger’s piece. Shinsadong Tiger is a composer who knows well the colors of 4minute’s personalities. “Except when he’s working, he usually converses a lot. He even knows all our insignificant habits. Besides the music, he draws concepts, hairstyles and even fashion styles. When we’re recording, he draws a lot so we could do things differently. He says ‘Do what you want to do. The right way is not in the music’. Even if he treats us well like an older brother, he doesn’t only compliment. He comments and listens carefully too.”

Even if they wear dizzy kill heels, 4minute perfom flawlessy their intense dance routine. Their basic heels are 13cm tall. 4minute said “The pretty shoes are the high-heeled ones. We were not reluctant to this style and ended up wearing thin heels to show off a pretty line."
"Our feet are messed-up compared to when we debuted. We even got blisters and a lot of calluses. When we look at each other’s feet during the practice session, it breaks our hearts but they’re seen pretty. It’s the evidence of our efforts.” (Kim Hyunah)

The difference between each member’s appearance on stage and the trainee period is amazing and far beyond imagination. That’s how the five girls are leaning on one another and rushing to the top of the world of Kpop. "Rather than having the same personalities, we are more cheerful. We feel the members’ energy a lot."