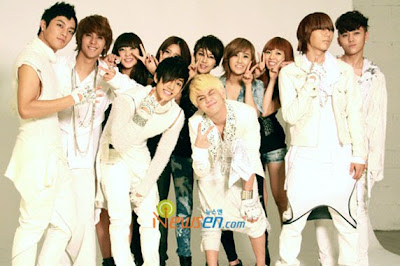 The entertainment companies nowadays have a trend of releasing two opposite, yet similar, groups out to the k-pop scenery. Big Bang & 2NE1 of the YG Family, SNSD & f(x) of the SM Family, and 2PM & 2AM of the JYP Family.

Like the saying, "Opposites attract", it seems like the harmony between the two groups are undeniably perfect. I am about to introduce you to a new pair-up of idol groups, and by new, I mean NEW. They are 4minute and BEAST of the PlayCube Family.

It hasn't been very long since 4minute debuted as an idol group, and the same obviously goes to our BEAST who debuted last week. They have both trained for a long period of time under the same company, ultimately resulting in their deep friendship. Their affections for each other can be shown through the picture taken when 4minute stopped by BEAST's album jacket shooting to boost their energy with support.

A representative from PlayCube said on the 21st, "They have been close as families ever since they were trainees. Also, 4minute managed to visit the shooting site despite their busy schedule. Even now, they are not conserving their efforts to help each other."