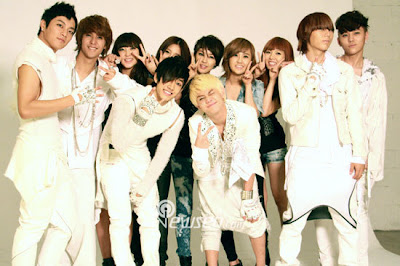 Cube Entertainment CEO Hong Seung Sung expressed his thanks to the fans of 4minute and Beast for their support by leaving a message to both group's fan cafe.

We wish for the fans' health and happiness in this season where the winter is about to strike with its heavy wind. Cube leads the industry as the trendsetter and has an infinitely beating heart and limitless passion. Our heartbeat is echoing beyond Korea and into the world.

We are happy that we shared our first moment, that adrenaline rushing moment, with our fans. The footsteps of fame continuing from 4minute's successful debut is showing the world about our fans' love to the world. BEAST recently had its debut stage and received our fans' support. Your cheers fuel them to perform on the stage.


4minute and BEAST are the happiest when they sing and dance on the stage. I wish that I could keep them happy for as long as I can. Just like a diamond which becomes stronger through ages of pressure, I think that they have given the opportunity to shine because they have endured such long time of hardship. The BEAST members have experienced a lot for their young age but they have not given up and trained themselves even harder to become what they are today. 4minute have shown forbearance unexpected from their age and because of their hard work they shine like they do now.

The groups not only help each other but they are similar to each other in a sense that they practice continuously into the early mornings. They know the meaning of being on the stage better than anyone else because they have been through so much, and that must be why they try so hard. Cube will support them as best as we could and will not betray support of our fans. We will help them spread the wings of their dreams. We will pay attention to every single comment by our fans and work hard with our ears wide open.

In other news, it was also reported earlier during last November 5's M! Countdown episode that both 4minute and Beast have shown great support to each other including their fans.

4minute after their What A Girl Wants stage cheered for Beast when it was their turn to perform Bad Girl. In particular Hyun-ah following Beast's Bad Girl choreography showed her enthusiastic support for the group.

4minute and Beast after their respective performance left together showing a harmonious appearance which encouraged each other. The fans gave a warm reaction seeing both group's support for each other.