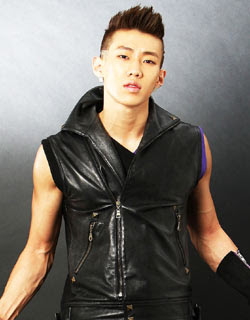 It has become a hot topic after people belatedly found out that 2PM’s Jaebum showed how much he misses the Korean fans at a b-boy competition in Seattle.

On the January 31st, Jaebum participated in a b-boy competition hosted in Seattle with his crew AOM. Because AOM won at “Winter Night," a competition held in December, they got to enter this highly competitive contest. Jaebum changed clothes three times and wore many different articles of clothing including a white t-shirt, a black t-shirt, and a jacket.

The clothes he wore that night were presents sent to Jaebum by the Korean fans. Through 2PM’s fancafe and Youtube, the fans that saw Jaebum b-boying showed particular interest and said, “Jaebum is using this performance to show the fans how much he misses them and how grateful he is for them.” Recently, an AOM member wrote on his twitter, “I think Jaebum wants to go back to Korea. What is the situation like in Korea?” catching the attention of fans.

Hottests, 2PM’s fanclub, are planning to strongly demand for Jaebum’s return to JYP Entertainment. They are going to turn in an official inquiry insisting on Jaebum’s return and depending on JYPE’s response, Hottests are planning on boycotting everything involving 2PM. They are also considering returning the albums that they have bought. One Hottest said, “We are gathering questions for the official inquiry to turn in to JYP on the 12th. There will be questions regarding Jaebum’s return and there will also be questions regarding JYP’s insensitive attitude towards Jaebum after he left.”

In response to this, a JYP representative said, “We were able to communicate with the [Wonder Girls’] fanclub after Sunmi’s decision to halt her activities and resolved the misunderstanding. We are planning on doing our best to sincerely answer the 2PM fanclub’s inquiry.” He also said, “There are many things that the fans have misunderstood. A direct example would be the rumor that the company told Jaebum not to participate in the b-boy competition in America,” and added, “Through the inquiry and [our] reply, this will be an opportunity to communicate peacefully.”

May be taken out with full credits. You are not allowed add yourself to the credits nor edit the credits.
CREDITS : IlGanSports (SOURCE); ___@2ONEDAY.COM (TRANS)
Tags: 2pm, Jae beom
Share
Previous articleNext article