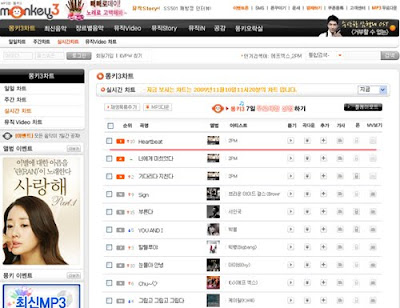 On the 10th, music site 'Monkey3' showed that 'Heartbeat' immediately took first rank the minute of its reveal. Many are showing attention to this feat as 2PM has yet to hold their official comeback stage and managed to land such a high place on the chart.

Not only 'Heartbeat' but 'Tired of Waiting' and 'I was crazy for you' have also been holding their solidified positions in the charts upon reveal, making many express feelings of amazement.

Monkey3 stated "With the revealing of the first two tracks, many have been anticipating 2PM's first album. It seems as if 2PM will be resurrecting the popularity of boy bands once again."

'Heartbeat' is a track with an addictive hook and an old school style rap that also adds in an orchestra, creating a dynamic track produced by Park Jinyoung.