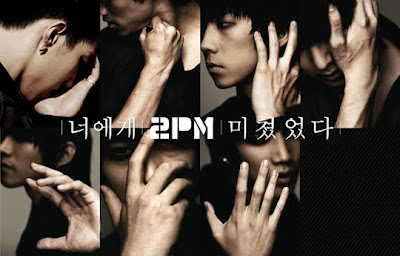 The title song 'Heartbeat' in 2PM's first official album '01:59PM', is garnering immense popularity as soon as it was released on the 10th. It had placed 1st in various music charts and is staying on as one of the top searched terms in various portal sites.

2PM's new song, 'Heartbeat' comes after their debut song '10 out of 10', 'Again and Again' and 'I hate you'. The song embodies a powerful yet dark and wistful sentiment -- the color of 2PM is well captured. 'Heartbeat' is written and composed by Park Jin Young. It uses the actual heart beat sounds of the 6 members as the base and an orchestra is arranged over the sound creating a sad, doleful melody that captures the melancholy sentiment.

As much work has been put into the song, they have put in a lot of effort into the marketing as well. As they have gained a lot of attention through the '01:59PM' 'Tired of waiting' 'I was crazy for you' as well as the teaser marketing, they have completed the image marketing with the connection between 'Heartbeat', the idea of 'waiting' and the actual pulse of the heart. Anxiety, fear, yearning and various other meanings have been attached to the song 'Heartbeat' and has been coupled with the sound of the actual pulse creating an image sound for this whole album's concept.

The peak of 2PM's marketing is 'Jaebum' who had left the team in September after the anti-Korea controversy. The song, which is more sorrowful than before, is used along with the idea of fear and anxiety as a theme. This marketing point is combined into one with 'Leader Jaebum's absence' and the fans' desire for his return.

The result of many fans discussing how the album's title, '01:59PM' has been used to call 2PM without Jaebum, along with how the songs, 'Tired of Waiting' and 'I was crazy for you' seems to reflect the 6 members' and Jaebum's thoughts are all a result of how the marketing point has hit its mark.

Although fans are worried that they are using Jaebum too much for just marketing, many in the music industry see it as a way of telling the story of the whole album, especially after the talk of Jaebum's return possibly becoming a reality.