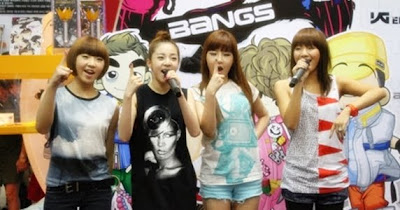 2NE1, the leader of idol groups tries to do solo activities, and it is very successful so far.

2 days after releasing her new solo song, Bom automatically topped first place in many music chars such as melon, dosirak, bugs, cyworld etc. But before that, the other member sSandara released her song “Kiss”. She also won first place on real-time charts and weekly charts.

Then, what is the reason why people are into 2ne1 and even their solo activities are successful?

We have to look at why they do solo. It’s because to avoid boring typical activities and money. Firstly, if a certain girl group keep their group image too long, people would get bored. When they do some solo activities, people tend to pay more attention on new things. Second, It is because of the money. There is an old saying “Grasshoppers have their own time.”. These days 2ne1 is having a great time with their fans, and YG wants to make money with 2ne1 as much as they could. It will be huge amount of money if they do group and solo activities together.

It is a really good deal for entertainment that has idol groups. 2ne1 is currently famous idol group in korea. No one couldnt resist but to pay attention on 2ne1’s solo activities. Plus, we can see different sides of each member as watching their solo performance. Most of 2ne1’s fans are teenager and most of teenagers are using the internet almost 24/7. So, the root of making 2ne1’s song placed first is the power of teenagers.

But this individual activity of idols somehow caused a gap between wealth and poverty in terms of show business industry.

Famous groups are doing too much both group and solo so other groups are losing their opportunities.

At the same time, people are also losing their opportunities to see new and fresh singers.

Not open for comments til some of you realize your mistakes for bashing.

No matter what company artist came from,all of them do have talent and have their own style and concepts.So stop comparing.