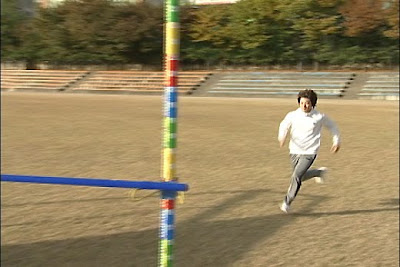 2AM's youngster Jung Jinwoon has recently got a nose injury during filming.

He was on the first episode of SBSETV Youngest Idol Rebellion Time, which will air on November 7th at 10PM. The show has new challenges for the guests each week and their goal is to become the number one rated variety show with idols.

The show held a contest for which person could jump a bar the highest. Jinwoon challenged Jo Sung Mo's record of 2 meters and 25 centimeters and banged his nose on the bar, causing it to slightly crack. The injury wasn't serious and the filming went on with Jinwoon keeping his great smile.

He stated, "It wasn't an injury that was serious enough to stop the filming. Instead, I was sad that I couldn't be better and show more during the filming."

Others who participated in the filming were Dongho from U-KISS, Song Seung Hyun from FT Island, Shorty J from Mighty Mouth, and Yoonhwa from T-MAX.


Lets hope that Jinwoon and his nose will have a speedy recovery and that the show will garner much success!