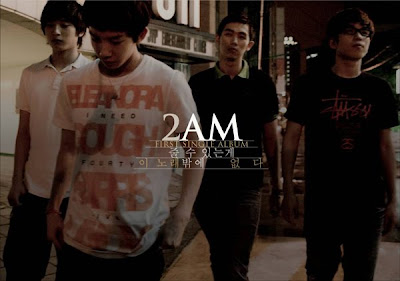 Mnet's "Director's Cut," aired November 2nd, Changmin and Seulong had the first hand experience in composing lyrics as singer Yoon Jong Shin was in charge of lyrics and composing the song. On "Director's Cut," Yoon Jong Shin and Ha Rim work together to create OSTs (Origial Sound Tracks) and reveal it on the show with actors and singers, the showbeing an artist reality program.

The song that the two 2AM members pitched in for will be placed in the documentary "DJ Limzy" which was personally chosen by Ha Rim. The PD of the show, Kim Hyung,said "Although 2AM is an idol star, their skills are beyond any other idol and their skills are worthy to be approved as they swallowed their parts well, leading to a satisfactory result."

The members of 2AM said "This was the first time we sang along to an acoustic guitar" as tey were extremely happy. They also sang their own song and of course, Sung Shi Kyoung's 'From the Distance' while filming. A staff said that "Yoon Jong Shin was happy upon hearing 2AM say that they liked the song 'From a Distance' which he composed himself."