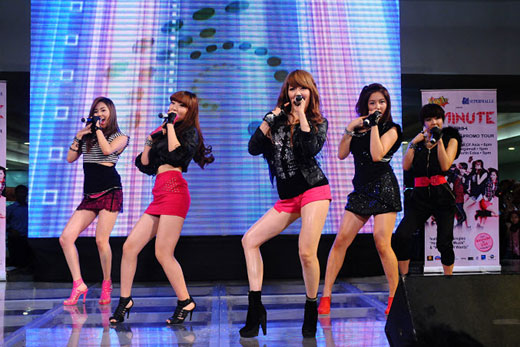 The 5-member group 4minute set a record in Philippine for the number of people who attended their showcase.

On the 6th, 4minute, who started their promotions in Philippines on the 4th, hold a showcase in the second-largest mall in Asia, the event was welcomed by more than 5000 people.
At SM Megamall in Manila downtown, the crowd was so hyper that the security line collapsed and the audience’s cheers covered the sound coming from the speakers.

It was when the live performances of 'Muzik' and 'Hot Issue' happened that the safety fence at the front of the stage collapsed. A performance had to be done again in order to calm down the audience instead of the postponed interview, supposed to be an interlude between the performances.

Around 10 minutes after the performances were interrupted, 4minute’s leader Nam JiHyun said :“The fans’ safety is the priority. Let’s end the performance without getting anyone hurt. Once again, thanks for having welcomed us, everybody, I’ll never forget you.”, thus showing the mature side of her.

On the 7th, 4minute will end their promotions in Philippines by performing on a major broadcasting channel, holding their last showcase and later a signing event. They’ll return to Korea on the 8th.