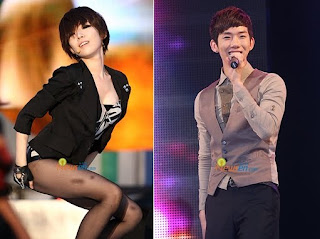 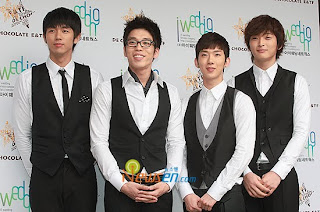 Jo Kwon - Ga In fixed appearance on 'We Got Married', 2AM's response 'Worry vs. Envy'

2AM's Jo Kwon and Brown Eyed Girls Ga In's fixed appearance in 'We Got Married' (WGM) has been confirmed and
there are mixed responses among the 2AM members.

Ga In (22) and Jo Kwon (20) have been chosen as a married couple for the Chuseok special of MBC 'We Got Married'. The Ga In - Jo Kwon couple is supposed to represent young couples where the wife is older than the husband. The episode that aired had reached number 1 in ratings at the time. The two had finished the 2nd filming on the 14th after the confirmation of their fixed appearance on the 7th.

Regarding this, 2AM member Seul Ong had recently expressed his envy as he stated that "the two are too cute" in a recent interview with Newsen. Seul Ong and the team's youngest Jin Woon are part of the 'WGM' panel. During the interview Seul Ong stated "I just finished filming 'WGM'" and added "I was watching the Jo Kwon-Ga In couple footage and I was dying because they were too cute."

The team's oldest Chang Min worried for Jo Kwon's fake marriage life during the filming of MBC 'Quiz to change the world' (Sebaki) stating that "I have a lot of worries". As the only current idol member that has completed his military service, Chang Min worried for young Jo Kwon's married life because he has no experience in dating or relationships, and went on to boast "I've already kissed early on in life".

On the other hand, Jo Kwon had left a message for his fans on the 20th through the iSky message service stating, "Our newlywed house is a container box, *sob*" "It was tiring but fun filming"

In the Chuseok special of 'WGM' Jo Kwon who is 2 years younger than Ga In, showed a considerate and gentlemanly side as a younger husband in contrast to Ga In's honest and tough image.

Jo Kwon prepared a wedding car decorated with flowers and the slogan "marriage is a good thing" and surprised Ga In, showing a strong and reliable side of him as the younger husband.

The next episode of the two newlyweds crazy marriage life in the first ever mobile truck lovehouse will be aired on October 24th.