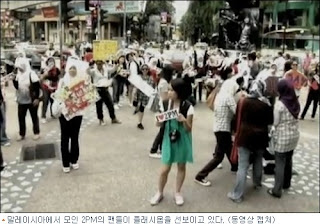 2PM International fans, Gathering attention by uploading 'Waiting for JaeBum' flash mob videos from all over the world

caption in picture: 2PM fans in Malaysia gathered for the flashmob

The Fan union have come together recently after 2PM's leader Park Jay Bum had resigned from the group and left for America following the controversy surrounding the myspace issue.

The videos have all been released/spread after the flash mob that took place in Seoul MyungDong when a total of 107 fans have froze abruptly at 1:58PM for approximately 2 minutes and continued to stay frozen until 2PM.

At the end of the video, they expressed their longing for Jay Bum's return writing 'Jay Bum ah, because you're not here, it feels as though time stopped'

One netizen, after viewing the video commented, "They are amazing fans," unable to hide their admiration. Another netizen wrote, "I hope the fans wishes come true and Jaebum returns so that they will be able to see 2PM as 7 again."