Share
0 comments
Malaysia was one of the lucky countries where CNBLUE performed their ‘BLUE MOON’ tour. The press conference was held at The Grand Hyatt Hotel in Kuala Lumpur together with the special meet and greet session that was organized by Samsung Malaysia Electronics for the lucky fans who were selected to see their favorite idols from up-close.
The people who were present at the press conference gave a round of applause once CNBLUE steeped into the room. The boys were looking as dashing as always with their casual clothes together with their smiles on their faces. 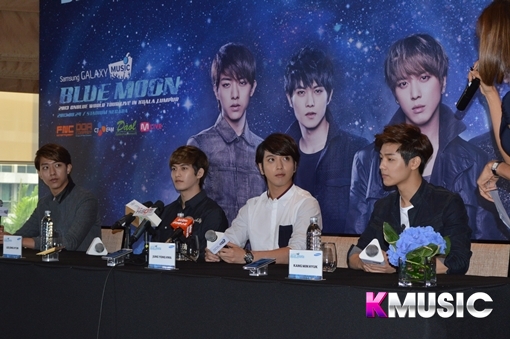 The popular boyband greeted the crowd  with “Apa Khabar?” which means “How are you?” in Bahasa Melayu which is Malaysia’s national language. They looked happy and hyper with their bright smiles on their face as Jungshin and Yonghwa told the crowd to put their hands up.
Before the Q&A session begins, the MC told the boys to introduce themselves since some of the people that were present might see CNBLUE in person for the first time. The boys started introducing themselves one by one starting with Jungshin, Jonghyun, Yonghwa and Minhyuk.
The MC popped up the first question and it was for leader Yonghwa, “You have written a lot of songs for the band, how did you do it?” Yonghwa answered truthfully, “It’s not that I make plans or anything but it is an inspiration. It just comes naturally and it depends on who I am thinking about or what kind of music I listen to, it also depends on the environment. So sometimes I get inspiration for the lyrics or for the melody.” 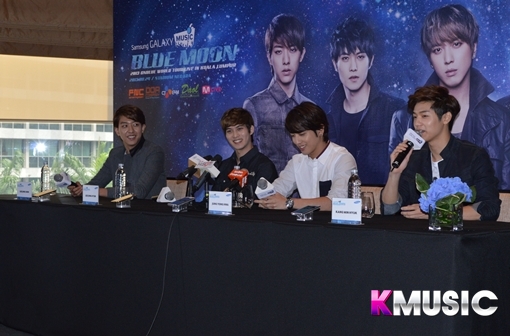 The MC smiled as she said, “Maybe after this performance, you can get an inspiration about Malaysia and write a song about it?” Yonghwa grinned as he sang, “Oh Malaysia~” what made everyone burst out in a round of laughter.  “So guys, keep your eyes open in the future because a song about Malaysia might be in their next album,” the MC joked.
The next question was for  Jonghyun, “You were a Judo gold medalist in high school, so can you take on a ‘baddie’ when you are in a tough situation?” the boys chuckled before Jonghyun answered, “Well, now I have a lot security from the bodyguards, so I don’t think it’s necessary for me to take an action”.
The third question was for the giant maknae Jungshin, “You are the youngest but the tallest in CNBLUE, and you became a runway model for fashion events. Did you have a disagreement with your team member and did you have to go like ‘Hey, I’m the tallest!’?” Jungshin answered in English,“No!”  but his loud voice made people laugh. “You are a very nice person” the MC laughed and Jungshin grinned as he answered in English “Thank you.”
“Do you have any fashion advice for your teammates?” the MC read out the nest question. “Well, it’s not quite an advice. But whenever we go to a country like Japan, we give some ideas to our stylist, like ‘I want to wear something like this’ or ‘I want to wear something like that’ ,“ Jungshin answered. 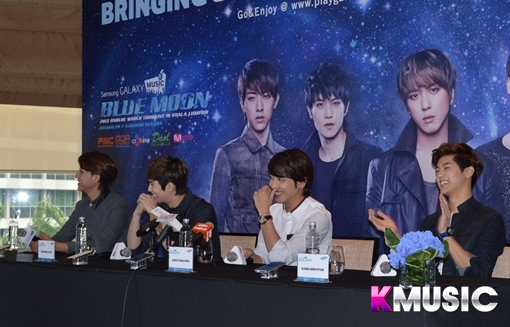 The last question was for  Minhyuk, “You acted in a Korean drama, so for you, which is your first love? Singing or acting?” Minhyuk didn’t hesitate to answer, “My first choice is always the band, that is always my priority.”
Before the session ended, the people who were present were given a chance to asked a few questions to the boys. One of the question was, “Both Yonghwa and Jonghyun are successful song writers but what about the maknaes Jungshin and Minhyuk?”
Yonghwa chuckled as he said “Maknaes?” Minhyuk told them, “We give each other ideas but we are still learning and Yonghwa is teaching us. But when we are at the dorm, we edit songs together. So whenever we work, I get to learn more things so by the time I have reached the level of my creativity. We will have our songs out that are written by us.”
Another girl wondered, “What inspired you to name your world tour ‘Blue Moon’?” Minhyuk answered, “Blue moon always comes once in a long time, sometimes, when two full moons appeared together leads to blue moon. Since it’s our first world tour and we wanted it to be special so we named it ‘Blue Moon’.”
The press conference ended with the head of Samsung Malaysia Electronic, Vincent Chong, gifting a small token of appreciation to CNBLUE for coming to Malaysia. As the press conference was held on Friday, their concert on the other hand will be held on Saturday. So stay tuned for more news about our lovely boys! 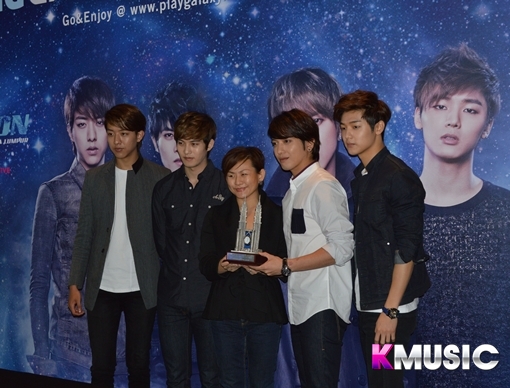 Article and photos by: Shira, Karolina