Following his fellow ‘Running Man’ co-stars, Kim Jong Kook and HaHa, ‘The Asian Prince’ Lee Kwang Soo had also made his way to Singapore! In town for his very first overseas solo fan meeting,Kwang Soo kick started his schedule with a press conference on August 16th at the Resorts World Convention Centre.

Best known for his betrayer character and the kirin (Giraffe) of popular Korean variety show ‘Running Man,’ Kwang Soo’s entertainer persona has gained him immense popularity across Asia. In fact, the lanky 28-year-old has also long been known as an actor and model. Riding on his recent drama ‘Goddess of Fire,’ where he starred alongside Moon Geun Young, Lee Sang Yoon, and Kim Bum, Kwang Soo is now set on paving his acting career. 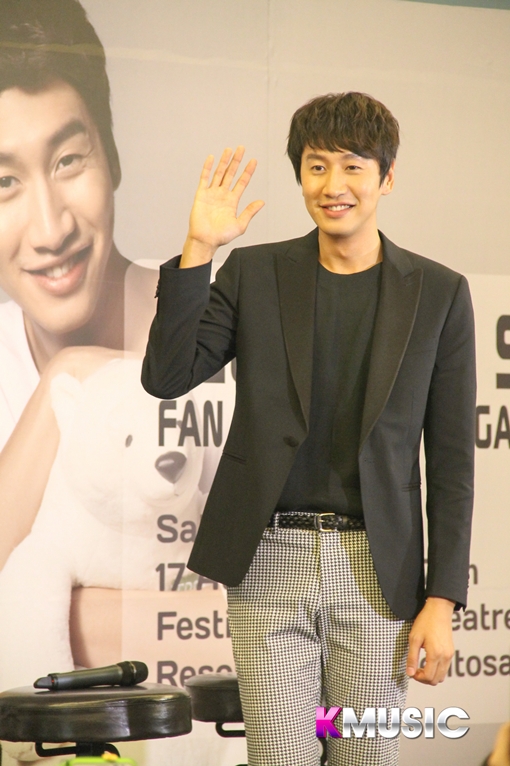 Akin to his hilarious and charismatic personality onscreen, the press conference with Kwang Soo was also full of surprises.

All smiles, Kwang Soo started the session with a warm greeting to the media, “Hello everyone, I am Lee Kwang Soo. It’s my first time here for a fan meeting and I’m glad that you guys are here. Thank you for the support and love!”

Standing at a whopping height of 1.9 metres, many probably wonder what is the secret ingredient to Kwang Soo’sextraordinary height? “I love milk, lots of milk,” he confessed. Artists in general embrace height, and Kwang Soo is totally comfortable with his enhanced feature,“Frankly, I’m quite satisfied with myself. (Being this tall) I may have a little difficulty in terms of dressing up, but I like the height I have.” Nevertheless, Kwang Soo did lament his disadvantage of being ‘easily spotted’ on ‘Running Man.’ 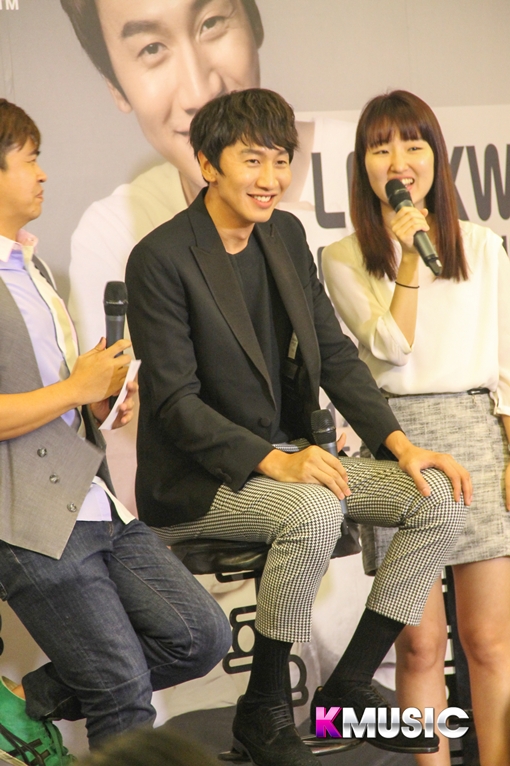 What about marriage then? Kwang Soo was surprised when he was asked about the age he wants to tie the knot ,“I am very embarrassed when I get these kind of questions. Honestly I haven’t thought much about it, but I will wait for Jong Kook Hyung to go first” garnering laughter all around, he continued, “Thank you for your interest in my marriage!”

Moving onto his acting career, Kwang Soo was asked if there is any particular role he wants to try his hand at. Having starred in numerous films and dramas, Kwang Soo shared, “Instead of a particular character, I hope to try a variety of roles as an actor. I have played a lot of friendly roles before, so perhaps my recent role (in ‘Goddess of Fire’) is contrastingly more of a villain. I want to keep trying out different things.” 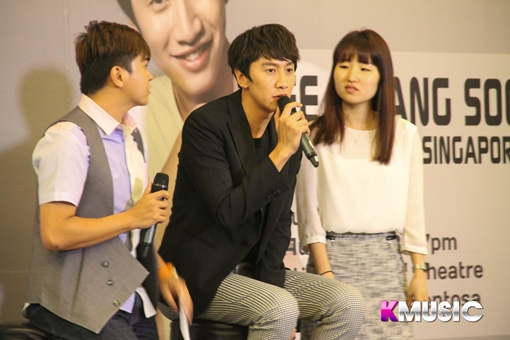 Despite bagging a scores of awards in modeling and as an entertainer, the actor awards have yet to knock at his door. When asked if he is confident that 2013 would be the year, a thoughtful looking Kwang Soo said, “I actually don’t have the ambition for awards now. I just want to do my best every moment. If I get lucky one day, I will receive it onstage coolly.”

Well, the medias present were lucky enough to witness just how cool he might be, as the emcee initiated an impromptu ‘Best Actor Award’ receiving ceremony. Kwang Soo showed that he is definitely ready to nail his first acting trophy recipient – with a perfected face of disbelief and a diva-like ‘Thank you’ -before bursting into laughter in amusement. 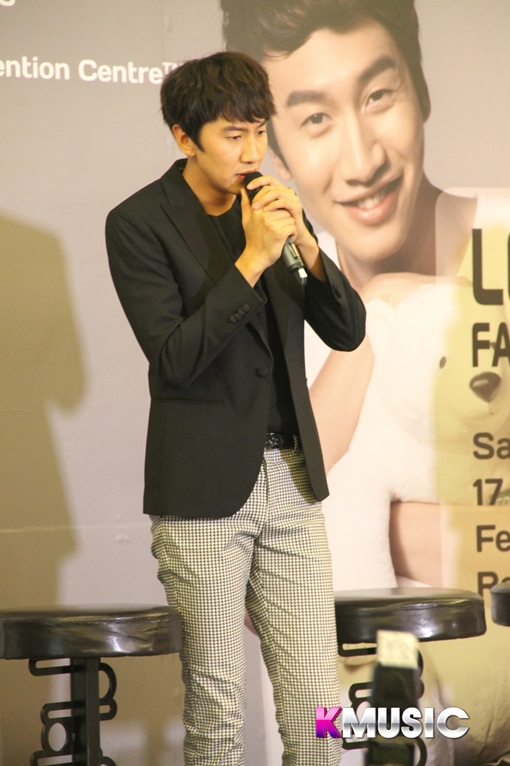 On a serious note, Kwang Soo’s earnest attitude to “always work hard at whichever project I’m on and do my very best” shown that he is an actor worthy of anticipation and recognition.

In fact, we all know Kwang Soo has a kind and sincere nature on and off screen, but that was not often portrayed in ‘Running Man’ – if given a chance, what character would he like to have? To that, Kwang Soo admitted that “The only way for me to win is probably to betray others,” before mentioning his beloved Jong Kook hyung again, “However, if opportunity allows me, I will probably work out and be a little more like Jong Kook.” 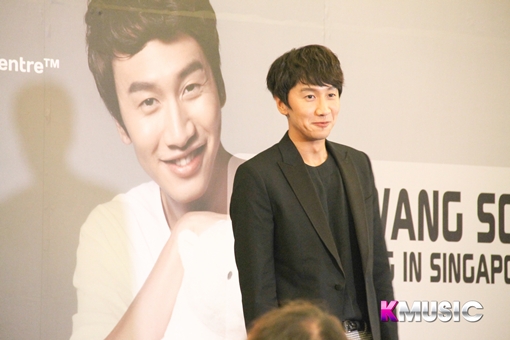 A little ranking session stirred up at the conference. For the record, and in Kwang Soo’s opinion, the ranking of ‘Running Man’ members in the order of merit went something like this: Sparta Jong Kook, Kwang Soo, Ji Hyo, Jae Suk, Gary, HaHa and rounding up with Suk Jin. Putting himself second only to Sparta, Kwang Soo quipped, “Jong Kook hyung is very sensitive when it comes to issues like these. He’ll probably be really happy to know he topped my list here.”

So after filming 159 episodes, which was the most memorable? Kwang Soo said that he loves the overseas filming, but mused that the episode on ‘Kingdom of the Animals’ was one of his favourite for the obvious reason that he was the last two survivors with Jong Kook,where he eventually triumph the tiger and won –“It gave me great pride, I loved it!” 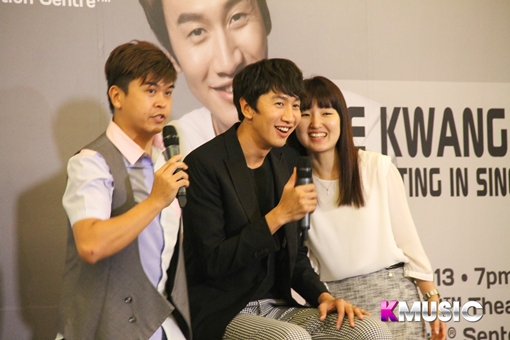 Kwang Soo also shared that he was shy growing up, and can be quite affected by his surroundings, but “On ‘Running Man’, I am thankful for the bubbly members, like Ji Hyo noona, their energy rub off on me. On normal days, I’m a serious guy.”

To the recent drop in ratings for ‘Running Man,’ Kwang Soo was asked if he has any idea to boost the ratings.  He explained, “From the beginning, the rating wasn’t that great either. But we are never heavily affected by ratings. The cast will continue to work hard, to bring laughter and entertainment to our viewers!” In terms of guests whom he wants to meet on the show – Kwang Soo revealed that the cast does miss two of their earlier co-members, Joong Ki and After School‘s Lizzy. It would be a nice reunion to have them on the show.

Wrapping up the session on a light note, Kwang Soo provided a sneak peek to his fan meeting with his signature Robot Dance – coupled with his 101% full facial expression that drove even the media wild, before shriveling up in embarrassment. A very shy giraffe to survive Africa! 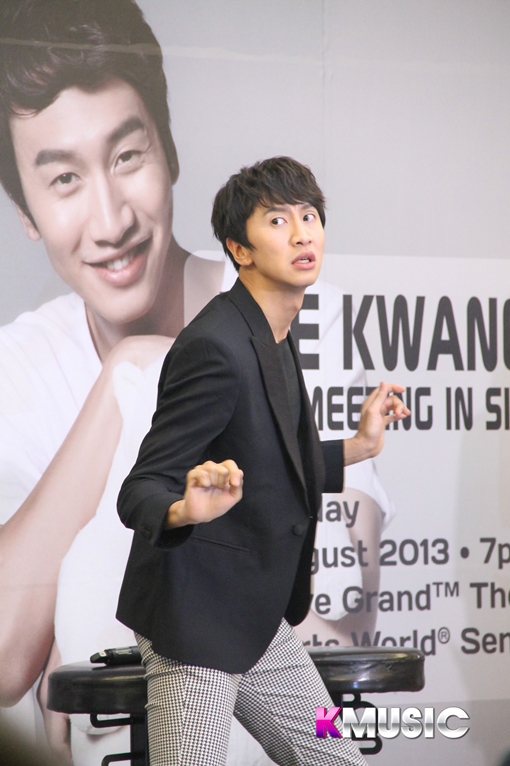 That said – fans could definitely look forward to more than just the Robot Dance at the fan meeting at Festival Grand Theatre, Resorts World Sentosa, with plenty of opportunities to be up close and get to know more about Kwang Soo. Topping that up will be the artist’s song performances. Be awed!

Special thanks to Faith & D Entertainment for the invitation.