It has been a long haul but the wait is over. After several global stopovers, B.A.P’s ‘Live on Earth’ tour finally landed in Singapore, literally!

Continuing their mission as aliens on Earth to save their faraway Planet Mato, B.A.P brought their first full-fledged concert in Singapore to The Star Theatre on August 8th. For the earthlings, it was both an ear orgasm and a visual feast. Fire, snow, warzone and downtown ghetto alleysall happened on the same stage! The impressive production and lighting certainly heightened the quality of the show, even during transitions, perfectly complementing the talented boys’ great performances and strong charisma.

The theatre itself was also a state-of-the-art. With a grandeur 5,000 sitting capacity and amazing acoustic, it befits a global boy group like B.A.P and a concert with such explosive energy. That said – the loudest of the night was probably the fans’ screams, of rocket highdecibels that left a ringing in the ears!

Opening the show was the story of how the six members were dispatched from Planet Mato, with the mission to enthrall the human species with great performances and save them from pain and cry. BABYz already went wild when the members – leader Yongguk, Himchan, Youngjae, Daehyun, Jongup and maknae Zelo – flashed across the screen in their Mato self!

Not missing a beat, the lights dimmed and the central screen split open. B.A.P stepped on stage amidst the screams of excited fans, waving their light sticks and lit up the whole theatre in an amazing sea of green. 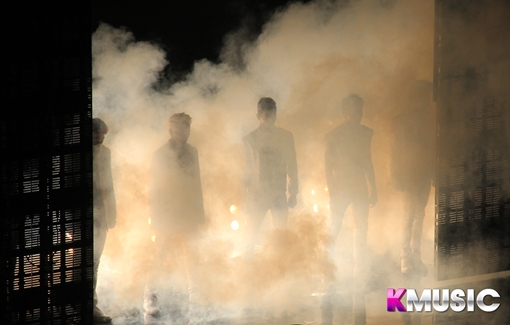 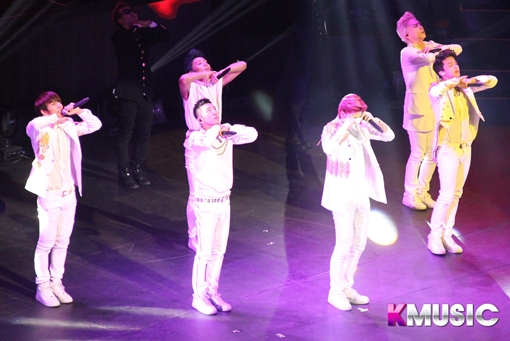 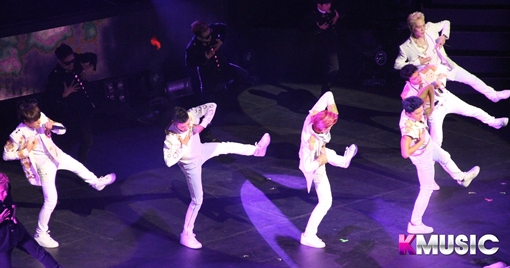 Kicking off the performance with their debut track ‘Warrior,’ B.A.P went straight into full throttle. Continuing the adrenaline rush were another two of their hit songs –  ‘What The Hell’ and ‘No Mercy’ – with equally powerful dance routines and heart pounding beat. Clearly, a favorite of the night based on the bouts of cheering, ‘No Mercy’ also perfectly showcased Jongup’s B-boy moves and Zelo’s high-speed rap!

Perhaps to preserve the novelty, media photography was only allowed up to this point.

Next, the screen was lit up with the word ‘Feelings,’ turned out to be an amazing intro to the softer side of the six big boys –‘Memory’ of Yongguk, ‘Expectation’ of Himchan, ‘Missing’ by Daehyun, ‘Love’ of Youngjae, ‘Tears’ of Jongup, and ‘Farewell’ by Zelo. 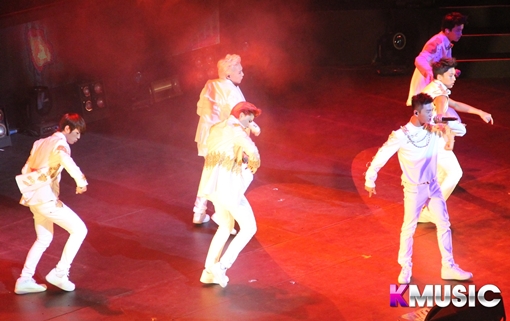 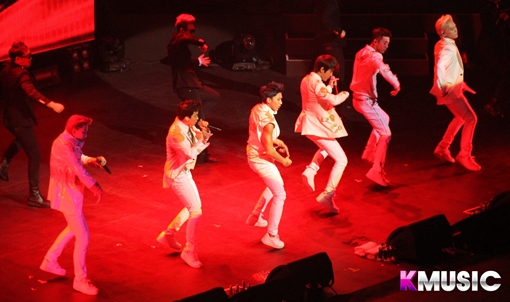 B.A.P’s live performances are always unexpectedly refreshing amid the mass K-Pop scene. On top of their powerful hit tracks, the boys delivered their softer tunes through more theatrical, musical-like ensembles.

Beautifully lit in blue, the stage had two somewhat lonely chairs placed in the middle. First up was the sentimental ballad ‘I Remember, ’perfectly delivered with Yongguk’s raw rap and Daehyun’s undeniable strong vocals that kept the audience mesmerized for a long time. Himchan, Jongup, Youngjae and Zelo then took over the stage with the sweet ‘Secret Love,’ where Jongup and Zelo did a couple rap. The six boys then reunite in a romantic setting for ‘Rain Sound.’ 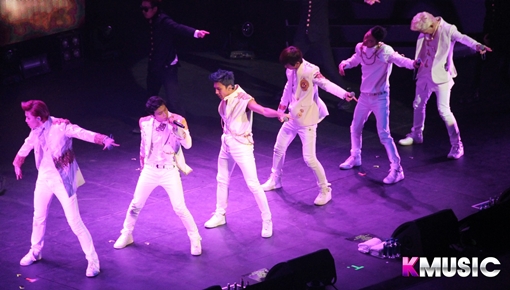 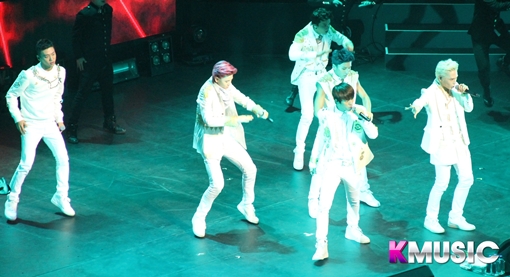 “Hello, we are B.A.P. Yes Sir!” Finally taking a breather, the boys cheerfully greeted their fans in a mixture of English and Korean. Zelo’s good English was certainly a pleasant surprise for many, “Singapore is a very special city for us. We miss you so much!”

Fans heard Zelo asked,“Do you want to know BAP better?” Of course we do! With the futuristic theme, B.A.P played up their ‘alien’ personas and took turns to be scanned against the screen for a body analysis. Language barrier was easily broken down by the computed stats and random personal traits shown on screen. 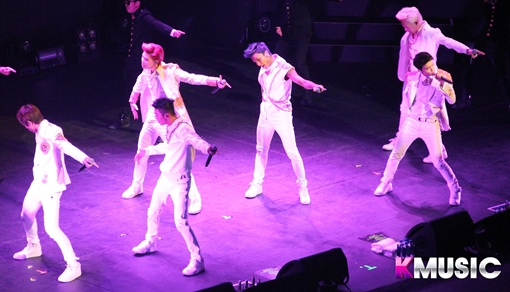 First up was ‘ShishiMato’ Yongguk, whom was described as a sports fanatic singer-songwriter and natural born leader. ‘Tats Mato’ Himchan is a pacifist, who is not only skilled in traditional Korean music but was said to be able to mimic leader Bang’s rap. Knowing fans will not be satisfied with just a claim, Himchan did an impersonation on the spot, an accurate one based on BABYz’ response!

Lead vocalist ‘KekeMato’ Daehyun is known for his outstanding looks and ability to hit 7 high notes. But did you know he is a non-possessive, good and motherly ‘wife’? Daehyun even showed off his talent in rapping as tried his hand at Zelo’s parts!

Youngjae, on the other hand, is the brainy‘JokoMoto’, who not only possesses a baby face but also a sexy voice. And ‘Dada Moto’ Jongup is a happy virus! Not your ordinary virus on the block, you can find both a remarkable six-pack and angelic sweetness in Jongup, who also showed off his oustanding dance skills with an amazing footwork.

Youngest of the clan – ‘Toto Maro’ Zelo is 184cm and still growing. Instead of LTE raps, Zelo showed his explosive aegyo with the Gwiyomi player. Even Yongguk got dragged down, who did a manly version, garnering giggles all around! 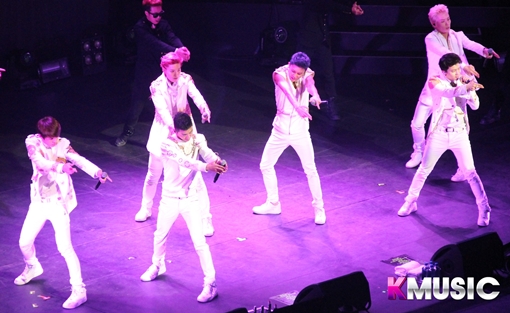 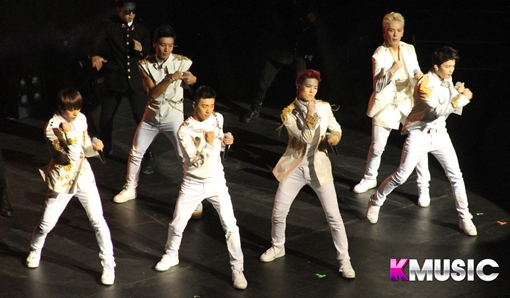 After the fun interacting session, B.A.P continued the night with duets. Lead vocalists Daehyun and Youngjae did a spectacular cover or R.Kelly’s classic – ‘I Believe I Can Fly’ – vocally on the point. Zelo and Jongup followed up with a funky hip-hop performance of ‘Teach Me How to Dougie’ by Cali Swag Districs, and their own ‘Never Give Up.’ Jongup’s somersault and breakdance further pumped up the atmosphere. On a side note, the boys looked way too sexy in their school uniforms!

Speaking of being sexy, it was a full-on B.A.P party with DJ Yongguj spinning, and Himchan joining in for ‘Sexy Clap.’ And yes, Yongguk did his hipthrusts, which drove the fans crazy!

Already grooving to the beat, fans were in for a surprise attack when a live camera started ‘searching’ and zooming into the audience seats. Many fans were very sporting, dancing to the beat, and gladly rated by the B.A.P members shown on the screen! 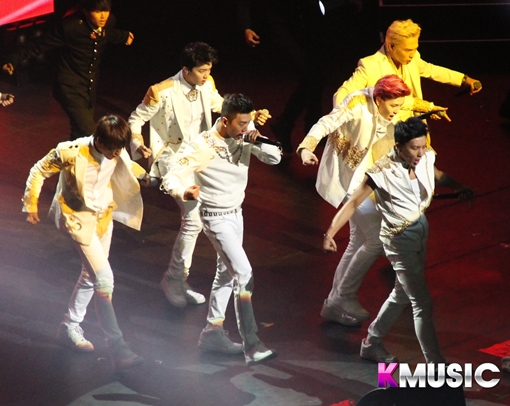 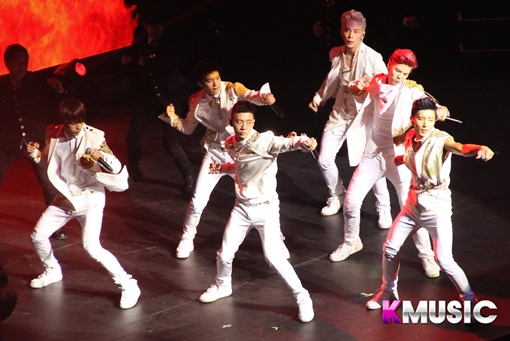 Just as everyone was immersed in the ecstatic atmosphere, a voice loomed over the theatre, “Are you gaining energy? Are you alive? I feel your energy. But still, there are many people on this planet in pain and tears.” With a heart-wrenching clip showing the realistic poverty and warzone situations, the performance proceeded seamlessly into the next segment.

Donning on chic black leather jackets, B.A.P set off the song ‘One Shot’ with their masculine dance and continued the vivacious energy into their next song ‘Punch.’  It was certainly a stamina demanding performance, but B.A.P shown that they lack of no power as they whipped out their spray cans for the dance break of the song ‘Power.’ And finally the boys revealed their toned biceps as they stripped off the jackets during ‘My First Kiss’ from 3OH!3!

Accordingly to Yongguk, it had come down to the last song of the night, ‘Goodbye.’ “Thank you for coming down tonight!” and he went, “Goodbye, no more pain no more tears.” 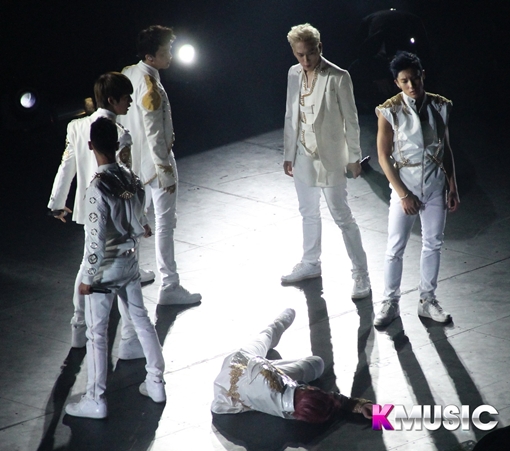 Supposed the last song, members took the opportunity and went near to the edge of the stage. The two visuals – Himchan and Daehyun were waving and had an arm-linked brother moment near one end of the stage, while Jongup gave fans his deep gaze – very sexy! Already drenched in sweat, most members were in singlet with towels wrapped around the neck, but leader Bang kept it cool with his shades and jacket on. Wrapping up the song were snowflakes and shooting confetti as the Matos waved goodbye and disappeared from the Earth.

While fans chanted ‘B.A.P’ for encore, a ‘Return’ and ‘Off’ button appeared on the screen – teasing the crowd, the cursor circled around the ‘Off’ for a while and met with big protest! Where a second is too long, the loading when ‘Return’ button was selected seemed to take forever – they need LTE, fans can’t wait! 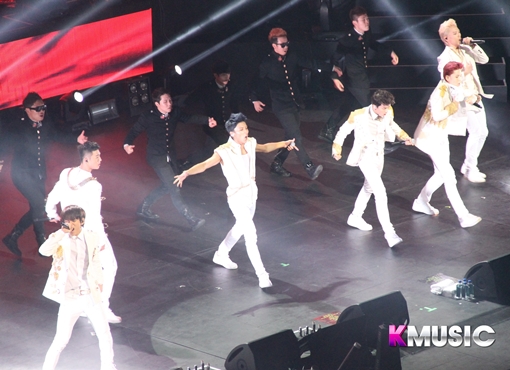 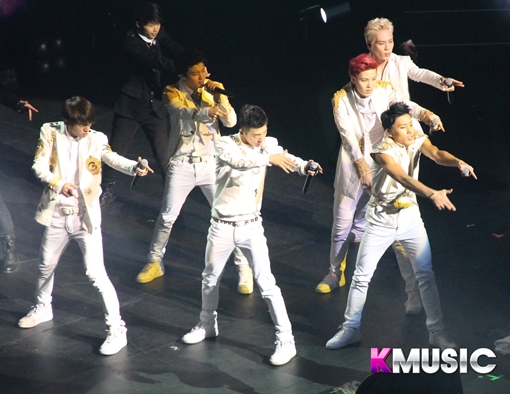 Once again, the boys appeared before everyone’s eyes in LOE (Live on Earth) hoods! Returning with ‘Coma,’ B.A.P went on to cap off the night’s performance with fun and upbeat songs – ‘Dancing in the Rain,’ ‘Crash’ and ‘Stop It.’ The boys were certainly good mood makers, especially with the super adorable dance moves to ‘Stop It,’ the noonas must have had the time of their lives! By then, everyone was already out of their seats and rushed to the front, dancing and enjoying the great atmosphere.

Not wanting to forget this moment, B.A.P had a photo moment with the theater of fans – Daehyun went “1, 2, 3 Kimchi!”

Now came the real goodbye. B.A.P ended the night with a sincere bow, and we can’t help but to notice how Zelo was so tall that he had a harder time bending down and matching the level of the other members! Waving, the boys gave a final shout-out “You guys are great!”

Definitely an out-of-the-ordinary experience – B.A.P, you boys are great too and we yearn for your return to Singapore!

Thank you Fast Track Events for the invite!