Singapore BABYz, B.A.P is in town! The hip-hop boy group had just kick-started their ‘B.A.P Live on Earth Singapore’ schedule with a press conference held at City Square Mall, on August 7th.

Fans went crazy! And they have reason to. Short for “Best. Absolute. Perfect,” the six-member B.A.P has swept more than a dozen rookie awards from around the world and were featured at the Grammy’s Awards in its “Snapshot: Best of 2012” alongside PSY – an extremely impressive success they achieved in the year of their debut.

Not intending to slow down, B.A.P wowed everyone with the recent release of their second mini-album ‘Badman.’ And following their recent tour to the United States and Japan, B.A.P will now treat their Singapore fans to a full-fledged concert as their final stop in Asia. 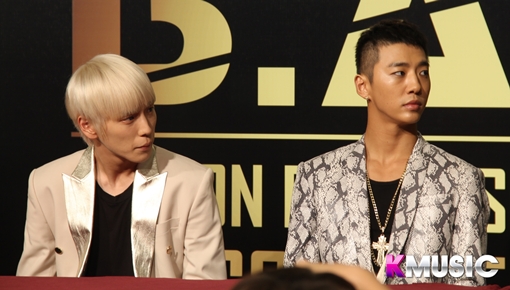 Fans were chanting ‘B.A.P’ like a mantra as the anticipation in the atmosphere raised. The atrium was jam-packed, with a sea of screams coming from all aisles across the different levels of the mall. In a flash, the dashing boys – Yongguk, Himchan, Youngjae, Daehyun, Jongup and maknae Zelo stepped on the stage and greeted their excited fans warmly.

So we heard the boys haven’t had their dinner then, and were planning to have their favorite chilli crab after the press conference. First question B.A.P was asked about was their impression of Singapore beyond the chilli crabs. The boys were all smiles, and commented that Singapore is really clean, the people are really nice, and – the best part – the BABYs here are so pretty!

Upon hearing that many fans queued up for 2 days to be the first to get their concert tickets, B.A.P was really grateful and promised that they will give back twice the amount of love to their Singapore BABYs at the concert. So what do they have in store for the fans at their show? Yongjae said, “We will bring forth our best performance, and of course, Singapore will get to hear some new songs live.”

Many of B.A.P’s music videos are filmed in the iconic cities such as the picturesque San Francisco. The boys were asked if they have plans to do one in Singapore. Himchan said, “Singapore is such a beautiful country. We would love to if there is a chance.”

When asked about the best moments since their debut 20 months ago, playful Daehyun said, “Right now is THE special moment for us!” 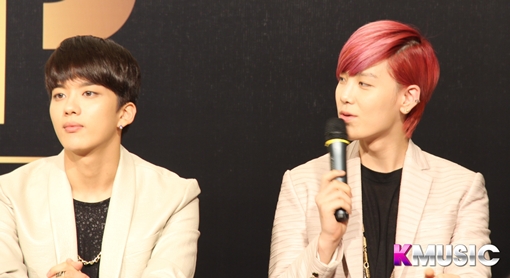 On to their new album ‘Badman,’ Jongup said that B.A.P added in some new elements and their own flavor to this album. So who is the ‘bad man’ of the group? Jongup chuckled, “It’s probably Himchan!” while choosing leader Yongguk as the ‘good man’.

Be it ‘bad’ or ‘good’ men, what is clear is that B.A.P has many accolades under their belt just during the first year after they debuted. When asked what achievements are they looking forward to this year, B.A.P showed that they are humble idols.Zelo said that they hope to introduce their latest album to everyone, and “We would really appreciate it if we can win any award. But no matter what, we just want to do our very best every moment.”

Concluding the session, B.A.P was asked about their world tour which lasted for the past six months – how has it been like and what is the most memorable. Daehyun expressed their gratefulness because they “have been embraced with love from all over the world!”

As promised, the handsome ulzzang boys came back on stage after a short break to give everyone the perfect photo-taking opportunity. Cameras were crazily clicking away , and if lucky, fans could win the concert tickets and be chauffeured to the show based on their snapshots.

B.A.P will head to The Star Theatre @ Star Vista on August 8th with a great performance in the bag. So Singapore BABYz, let’s show B.A.P lots of our love at the concert!

Special thanks to Fast Track Events for the invite!