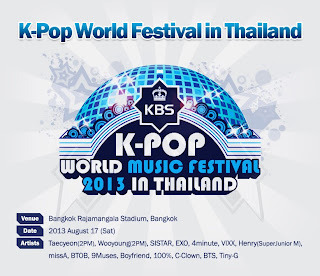 The gathering of the hit kpop groups in Thailand for KBS Kpop World Festival is cancelled. On August 8, KBS World first announced the cancellation through their official twitter account.

<Kpop World Festival in Thailand Cancellation Notice1-1>Concert has been CANCELLED due to circumstances. We apologize for any inconveniences
— KBS World TV (@KBSWorldTV) August 8, 2013


The event organizer, JMC Entertainment, stated the reason of the sudden cancellation through their SNS accounts. They explained that it was due to the current political turmoil in Thailand that would affect the security of the groups and fans. They also mentioned that it'll be delayed until February with a new event. They made sure that ticket buyers will get their refunds.

However, anticipating KPOP fans assumed that it might be because of the poor tickets sales due to the continuous Kpop-related events in the country.