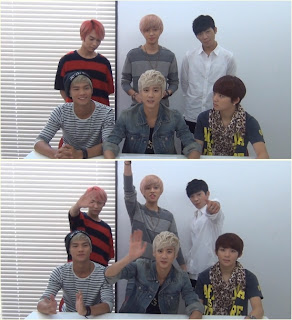 Teen Top personally announces their sudden comeback that will take place on August 26, through a video message released today. The announcement reveals that their upcoming mini album title track is 'No Joke'.

Teen Top reveals some details about their comeback on their video message. They also tweeted more exciting teasers as they wrote,

"Teen Top is great!!! It's no joke♡ -Chunji
Everyone, waiting time was really difficult, it was no joke right!! We'll treat you back with a cool image!!-Niel
This time it'll be amazingly no joke?-Changjo
welcome to my world. -C.A.P It's enormous.
From the new world-Ricky
L.Joe..Looks like it's no joke^^ -L.Joe"

TOP Media further announced through their fancafe, that the song is going to be an upbeat and exciting dance song that will emphasize Teen Top's "beginning-to-end-knife-like-formation" which is solely Teen Top's. The mini album's release is on August 26, Monday at 12:00KST, along with the Music Video. Teaser images and other details following Teen Top's comeback are going to be released in succeeding days.


ANGELS ARE YOU EXCITED? What do you think the concept will be?