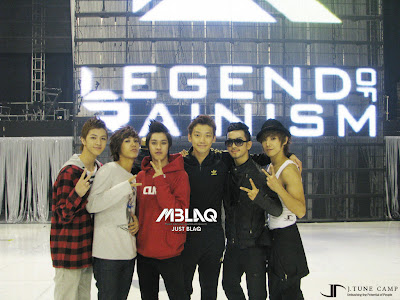 Super rookie MBLAQ has been a hot topic as soon as they debuted.

They are a 5-member group produced by world star Rain, and its members are known siblings to celebrities like 2NE1 Sandara Park and actress Go EunAh.

And in a recent interview, the members talk about their love and ‘hate’ for the ‘Rain leadership’ they receive.

▶Secret to the ‘Rain leadership’?

The group debuted with doing the opening performance to Rain’s concert previously on the 10th. And they were even called ‘Rain’s kids’ by many. Even though they just debuted, they have gained much popularity and capabilities. Hence, there is curiosity as to how the members see Rain.

FYI, MBLAQ has been called the in-sa-dol (coined by words ‘greeting’ and ‘idol’), this nickname was earned from their 90-degrees bowing when they do greetings.

* “Really? The first thing we learnt was the ways of greeting”
* “Perfectionism. We just do that and everyone just called us that after that. They said that we ‘JTunes Kids’ are dance machines. We did dance practice for up till 14 hours a day. At first it was tough, but slowly we adapted to it”
* Normally he is like a hyung to us, but when he transform into a producer he is someone who does things well.”
* “Even though there is much stress and burden, he never pass the burden to us. He always gives us hope and courage through his words.”

There are 2 members in MBLAQ who are younger brothers to stars and singers. Thunder’s sister is Sandara Park. In 2004, after watching a vide of Rain’s concert performance in the Philippines, he decided to be a singer and went back to Korea to do audition under JTunes and was casted as MBLAQ member.

When asked about his sister’s real personality as compared to the funny and carefree image she shows, he said, “She is the same real life. And very funny”.

Member Mir was understood as FT Island member Hongki during the group’s appearance on Mnet M!Countdown by one of the staff to the show.

But who he really look like is his sister Go EunAh. It is said that you can’t tell them apart if Mir is to have long hair. And his brother-in-law is also the president of JTunes Entertainment.
▶People say they are similar to 2PM?

Amidst this point in time where they call it the ‘beasty idol syndrome’, there were some reference to group 2PM.

Member Thunder has the looks like Nich Khun in 2PM. While 2PM focuses on acrobatic performance, MBLAQ SeungHo is known for his gymnastic performances. Their songs have the same type of feel. You will just get hooked to the group’s debut R&B title song ‘Oh Yeah’.
▶Looking for Rain’s lookalike

The members pick Lee Joon as the one who looked the most like Rain. In terms of looks and dance, the 2 are really similar.

It is said that he also have the build like Rain, and Lee Joon has a share in ‘revealing of the skin’ during performance.

But like the saying goes, even for the longest journey, everything starts with the first step. And all attention is on how far this group will go.