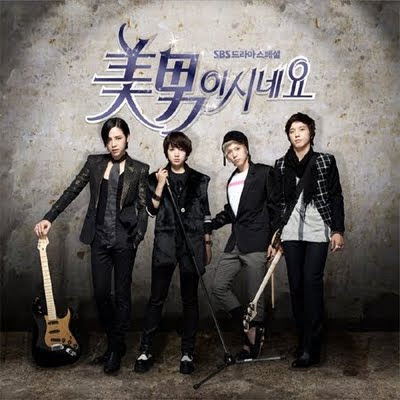 Jang Geun Suk recently visit Singapore. Teenage magazine get the chance to interview them. Want to know what he said?
Take a look here :
This being your first visit, how do you feel about Singapore?
I think Singapore is unbelievable. There were so many fans waiting for me in the airport! Up till now, I had no idea I had so many fans here.
We heard that you are claustrophobic. Was it difficult for you to fly to so many countries for your Asian Tour?
Yes! In the airplane, I walked around with my manager so it wasn't so bad. However I tend to get a bit frightened when I am recording in the studio.
Did Lee Hong Ki, your co-star in He's Beautiful, give you any recommendations on what to do in Singapore?
He said that the weather is good and the shopping is great. He also told me that clubbing is very hot here!
What was your first impression of your co-stars in He's Beautiful?
I was initially shocked by Hong Ki's mop of blonde hair! As for Jeong Yong Hwa, he is really friendly and treats me like a brother.
How similar are you to your character in He's Beautiful?
Both of us are perfectionists, especially when it comes to work.
You mentioned you would love to act in the sequel if there was one. Why do you love this series so much?
It has a good story line, cute actresses and nice theme song. This is why this drama is so charming to me. I'm always happy when I get to work on drama serial and I really enjoyed working with this one with my co-stars
Any more dark secrets of your cast members?
Hong Ki is not very good at dancing! We had to film a dance scene but Hong Ki couldn't really catch up. In the end, we had to change positions so it didn't appear obvious/.
So, are you the better dancer?
Of course! [Laughs]
You sang some songs in He's Beautiful. When are you coming out with your own album?
At the moment, there are no plans for that. For now, I will focus on movies. But I am also waiting for the opportunity to cut my own album. Hopefully, I can do so next year.
With so many Korean artistes in the market, how do you hope to position yourself?
I don't know but I would like to be able to fulfill my dreams. Many Korean stars are well-liked in Asia and I want to be like them. One good example is Rain and I look up to him as he is a singer and actor. He may be holding two jobs but he does a good job at both!
For your next movie, You're My Pet, you have a romantic relationship with an older woman. How do you feel about romancing an older woman in real life?
Age is not very important to me so I don't mind dating an older or younger girlfriend.
If you were a pet, what animal would you be?
[Laughs] This is the first time I'm being asked this! I want to be a rabbit as I was born in the Year of Rabbit. I like that they only eat grass which means I would never have to diet!
Has your popularity affected your personal life?
Nope! My fans make me happy. They are my source of energy!
And lastly, if you fell in love with Singaporean girl, would you bring her back to Korea?
There are no boundaries in love so it's not a problem to me. That's actually my hope! To get a girlfriend here! If I bring her back to Korea, I will personally cook for her as my hobby is cooking.
Source : teenage magazine, June issue
Interview by : Disa Tan
Credit : adela1991 @ DKPopNews
Follow me on twitter
Tags: Interview, Jang geun seuk, You're beautiful
Share
Previous articleNext article