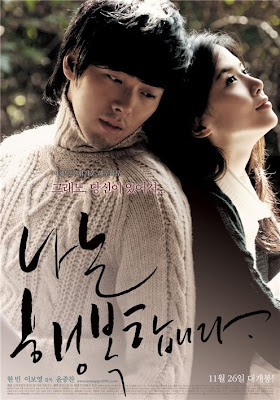 The official movie poster for Hallyu star Hyun Bin's new film "I Am Happy" was released.

"Happy", which stars Hyun Bin and actress Lee Bo-young, is based on a Korean short story about two wounded souls at a psychiatric ward -- mental patient Man-soo (played by Hyun) and nurse Soo-kyung (played by Lee).

The revealed poster shows the two characters leaning against each other under the sunlight and reads "Day after day, life is crazy difficult.. But because I have you.. I am happy.. "

Hyun, best known for his role in the 2005 hit drama "My Name Is Kim Sam Soon", recently made headlines after admitting to dating top Korean actress Song Hye-kyo, his co-star in last year's TV series "The World That They Live In."

Lee has appeared in several TV dramas including "Save The Last Dance For Me" in 2004 and "Seodongyo" in 2005. She made her film debut last year in "Once Upon A Time".

"Happy" is set for release in Korea on November 26.