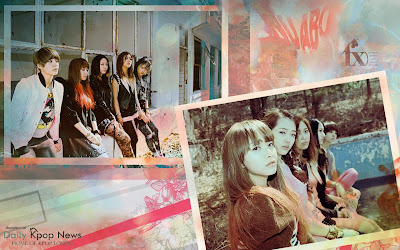 They’ve recently just made their comeback through their latest hit NU ABO, a song about the blending of blood types A, B, O and AB to create a completely new blood type. It was only a matter of time before the five girls of f(x) spoke on their own blood types (and love!). The girls all revealed their personalities and typical blood type traits that they had, and they even talked about their ideal fantasy with a boyfriend that they had. So which members are the caring type, needy type, distant type, etc? f(x) revealed all.

The members tell me that when I’m nice I’m Type O, but when I’m mad, I’m Type B. Is that a good thing? I hear a lot that I’m a little bizarre and 4-Dimensional, but I don’t know about that at all. First, if I get a boyfriend, I really like to cook so I think we’ll carry the lunches that I made and have picnics frequently. However, my boyfriend might get fat so he should be careful. Do you know about the Maldives? I want a house on a small island. I also want my own beach near my house. When I get a boyfriend, I definitely want to go to the Maldives together. Ah, just thinking about it is thrilling. Mmm, would I be able to go?

I’m Type B, but I honestly don’t think that I match my blood type. People say that my leadership is strong, but that’s not characteristic of Type B, is it? Ah, is blood type group anything important? (Laughs) I’m not the type to actively take care of my boyfriend. I don’t need a boyfriend who needs me to do everything for him. I also don’t need a boyfriend who is going to work hard to take care of me. I’m not the type to demand this and that. To me, a boyfriend is someone who I can be with naturally, someone comfortable. Truthfully, I have a lot of friends of the opposite gender, humph.

I’m a Type A, but, so that I don’t look timid on the outside, I’m the type to work really hard to appear confident. I feel that if I have something to say, I should say everything that I have to say. If I start to appear shy, I can’t stop it. With my boyfriend, I want to be more than anything a warmhearted girlfriend. I have so many things that I would want to do for him, I feel like we’ll be doing things without end; I’m worried that I won’t be able to do anything well. If I end up having to cook for him, I think I’ll have to secretly ask Victoria unnie for help. I don’t know if I’d lie and tell him that I did it. That kind of lie would be okay, right?

I’m a Type O so my goods and my bads are really obvious. I also can’t lie very well. I get lonely easily, but I feel like my personality makes it so that I get annoyed if I’m with sombody else. My boyfriend has to be someone who understands that kind of heart, right? If I get a boyfriend, I want to go to a lot of places with him. I’d like to go to Namsam, where the cherry blossoms and azaleas are in full bloom nowadays, and, when it gets hotter, I’d like to go to the ocean. I want to watch a sad movie with him too. More than anything else, if I have a boyfriend, I’d want to listen to the sound of rain together. I really like listening to the sound of rain.

It’ll be hard to get close to a timid Type A at first. You have to get accustomed to things gradually. If you become used to each other little by little, you’ll have a great relationship later. Even with my boyfriend, I would approach him carefully. I don’t know if I would show him everything or be completely open with him at first. Showing my boyfriend aegyo would be something that I’d “have to see about”. It’ll be all set if he’s good to me, right? A flaw in my personality is that I’m a careful person. Eating something yummy next to me all by yourself is a definite no. If I hold a grudge over that, it carries for a long time. (Laughs)