BIGBANG‘s G-Dragon is well-known for his generous heart and even though on August 18th it was supposed to be him who receives a lot of gifts, he decided to donate 81.8 million won (~$73,000USD) to the Seungil Hope Foundation for the establishment of a rehabilitation hospital for Lou Gehrig’s disease.

The amount of money, 81.8 million won, simbolizes his birthday, August 18th. YG Entertainment revealed that G-Dragon decided on the donation because he wanted to return his fans’ overwhelming love and support throughout the years. Additionally, G-Dragon’s fans made a similar donation, using his birth date, of 8,180,000 won to the same charity in his name.

Jinusean‘s Sean updated his Twitter with a photo of him, G-Dragon and Park Seungil, a former basketball coach, which was taken 2 years ago, and wrote, “Jiyong donated 81,800,000WON on his birthday to Seungil Hope Foundation so that they can build a hospital to treat Lou Gehrig’s disease. “

He continued, “Since 2 years ago when Jiyong first met with Park Seungil and until now Jiyong has been donating every year on his birthday to help the patients diagnosed with Lou Gehrig’s disease and the amount of donation increased significantly this year. Also Jiyong’s fans ALWAYS-GD donated 8,180,000WON to Seungil Hope Foundation.”

He concluded, “As someone who knew Jiyong since he was very little, I feel so proud and I am so happy to see him succeed as an artist and as a musician and how he is returning the love he received to the society by donating. On behalf of those who are like Park Seungil who is suffering from the Lou Gehrig’s disease but never lost his hope and as the representative of Seungil Hope Foundation, I would like to sincerely thank Jiyong and his fans. And Jiyong, happy birthday!!!!!!” 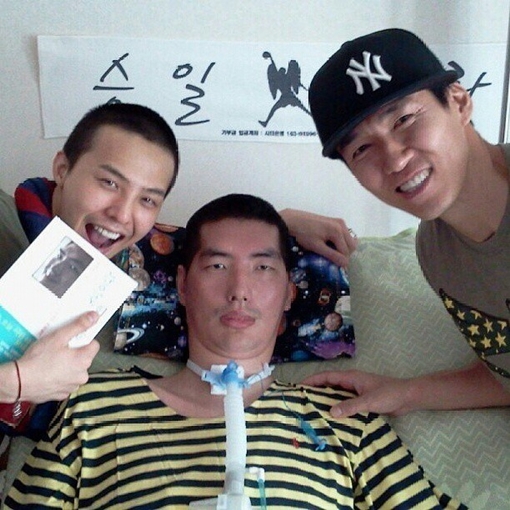 The post G-Dragon Celebrates his Birthday with Donating 81.8 Million Won to a Charity appeared first on The latest kpop news and music | Officially Kmusic.