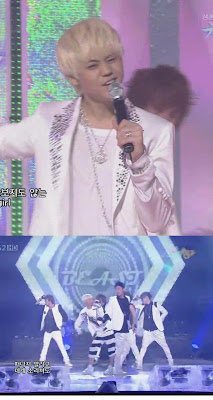 Sorry for the delay,this is supposed to be posted yesterday when Music Bank ended,due to some personal problem i only can post it now.

Anyway,another interesting story to share with you guys.I am not sure whether you have watched BEAST's performance on yesterday's Music Bank or not,something special happened on yesterday's "Bad Girl" performance.

BEAST's blondie Yang Yo Seob gave their leader Doo Joon a surprise when during their LIVE.For those who have seen BEAST's live performance before,it's Yo Seob' turn after leader Doo Joon sings the chorus part.

Yo Seob purposely launched a "butt attack" towards Doo Joon when it was his turn to sing on Music Bank,Doo Joon was really surprised with the sudden attack,he kept on laughing on the stage after receiving the sudden attack,i just wonder whether he will have a counter attack or not in the future when they perform LIVE again!!!


Just pause at 2.04 to watch his BEASTly Butt Attack!