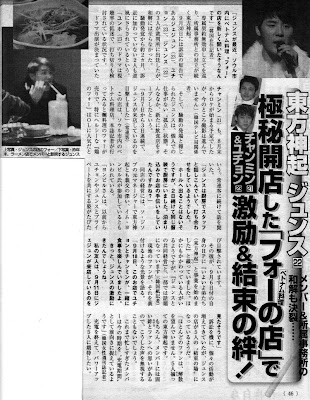 Tohoshinki is in the middle of a dispute with their managing company. On 30th September, the 3 members who filed the case, Jejung (23), Yuchun (23), Junsu (22), went to court, but an agreement could not be reached. The other 2 members did not participate in the case, but they are facing adversity.

"As Yunho's (23) drama ratings are low, so it has been rumoured that it will be cut short. As for Changmin (21) who confirmed his participation in his first drama, at the end of August; at this point in time, there has been no progress in the filming." (Korean TV Station contact).

Also, Junsu has no project of his own, is in a state of "isolation", and he opened a new restaurant in the midst of that.

This shop is located in Seoul City, and serves Vietnamness cuisine. This reporter went down to try out the Pho, which is a kind of noodle, and the healthy Pho (T/N: not sure on the meat) is especially popular amongst the OL.

"Junsu was talking to the kitchen staff, and he was having a meeting with them. He didn't exit to the hall, but he was wearing the same outfit on the second day, while he was in the kitchen. I suppose he's helping out in the restaurant?"

So Ji Sup's former manager and TVXQ's close friend Lim Yong Pil are also a part of this restaurant. Previously, Yong Pil was seen frequently meeting up with Yuchun and Junsu privately. On the 6th, he wrote in his homepage, "Finally, I've started a business with my younger brothers (TVXQ)." Also, the part that said, "Managing it with Junsu" raised a lot of interest. (Reporter from a Korean Newspaper).

On the 18th September, Yuchun and Changmin enjoyed their meal there together. Mostly likely to show their support for Junsu. My friend also saw Jejung at the shop on the 11th September.

"The fans don't want the 5 of them to disband. TVXQ is made up of 5 people. Of course, the members and fans have strong bonds, and this thought is something that cannot be disregarded. The members have always been too busy up until now, so this is a 'recharging period' for them before they continue sprinting ahead." (Female, Korean weekly magazine reporter)

After their recharge, the 5 members have a power-up, and we will be anticipating that.

Source: [chacha + SYC]
Translation credits: mandasoh@tohosomnia.net>
Shared by: tohosomnia.net
Do not remove/add on any credits