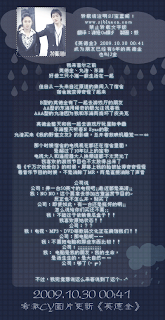 Young Duk Kim whom has been my friend for 8 years
also known as J Kim
Before I arrive in Seoul
Young Duk Kim, Yun Ho, Dong Hae
are like three little piglets living together
But ever since the wolf from Gangwon-do arrived in the hostel
The hostel became weird
Type B Young Duk Kim has friends to go arcade with
Type AA Dong Hae would stare at me in an awkward manner
Type AAA Yun Ho burnt his leather jacket because of Dong Hae and me
Young Duk Kim and I would spend the whole day in the arcade playing Star Craft together
Dong Hae would listen to N Sync for the whole day
Yun Ho would buy , and fall asleep while the player is still on ㅡㅡㆀ

The TV from back then, is still in the hostel now, a treasure that is over 10 years old
Mr TV and Mr Controller is now having problems when switching between channels
There’d be some problems showing the Gaming Shows which I used to enjoy
When watching , my face on the screen would be distorted
When watching Music Shows, it is either eliminated MR, or the sound itself

While the manager says

Me: NO NO, This would be brought to programs that examine antiques~ Since it can’t be switched on anymore, let’s just don’t sell it

manager : Even so, it is still good to have one;; Why are you so reluctant to get one even if we’re offering it to you;;

Me: I can never rely too much on the silly box!! I love the primitive option!!

Me: TV, MP3, DVD and all those electronic devices are not good for us!!

manager : So what about the computer …

Me: Don’t ever compare these things with the computer!!

But, why did I end up writing about this, what was I trying to say at the beginning- -^: