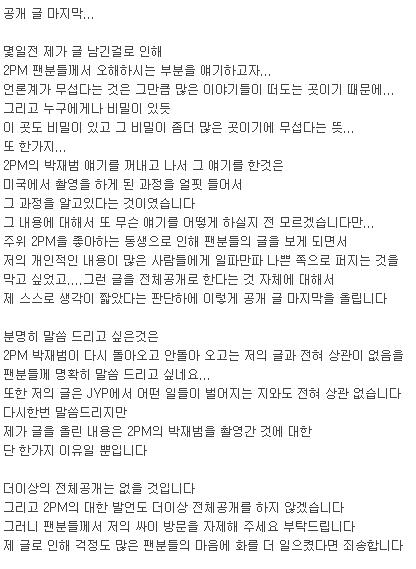 I think that a lot of the 2PM fans have come up with their own speculations regarding a post I made a few days ago.
When I said that the world of the press is scary, I meant that there are just that many more stories running around..
And just like anyone else has a secret, this world has its own secrets. The only difference is that there is a lot more.
When I decided to write about Park Jaebum, it was because I heard that he was being filmed in Seattle and I had overheard about the process of it.
I don't know what you will say but I did not intend for my words to be taken into such a negative light. I realize that my thought was short and I regret making it public. This will be my last post.

I want to make this clear.
My words have nothing to do with whether 2PM's Park Jaebum will return or not.
I don't know about anything that is going on inside the JYP building.
I want to say this again.
The reason I made that post was just to express my thoughts on the fact that the press made their way to film Jaebum.

I will not make public posts again.
I also will not make any public statements about 2PM either.
I apologize for stirring unneeded feelings amongst the fans and I ask that my cyworld not be so visited often anymore.

[ Words of the OP: It was written by the Wild Bunny producer. After she heard that KBS left for America to film Jaebum, I think she wanted to say that the process must've taken a lot of guts and secrets. Fortunately, I don't think she knows any more than we do and just wanted to clear that up. ]

[ Random comments left by Hottests:
"Sorry, producer T_T"
"Oh.. I thought there was a huge conspiracy over at JYP for a second. Thank god it's not."
"Is this true? Because I was so scared after having read her previous post." ]

I hope this clear things up. Do comment but no spamming about this. Thank you.
Tags: 2pm, Cyworld
Share
Previous articleNext article