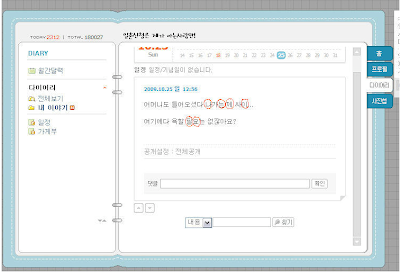 Taec just wrote on his diary, and it translates as:


"my mother stops by my cyworld. there is no need for you guys to cuss here"


However, when translated literally, it reads:


"this cyworld, even my mother comes in and out. there is no need for you guys to cuss"


Now, Taec could really mean that about his mom and about the cussing. But the way he wrote it in Korean is very awkward, causing the KHottests to look more into his message.

KHottest got this from his message. If you read the circled words on his diary (on the image), it translates as:


If he only wanted to tell people not to cuss because his mother comes to his cyworld, he didn't need to write the sentence that way. The sentence in korean is grammatically awkward.

This part of the sentence "어머니도 들어오셨다 나가는 제 싸이" literally translates as "CY that even my mother comes in and out". This is awkward in itself, to accomodate the proper order of the Korean of "I need Jay".

On the second row, he used the word "need". He didn't have to use the word "need" to tell people not to cuss there. He could've just straight up say "refrain from using bad words"

credits: Miss S for the tip and 2ONEDAY!

Do comment but please do not spam about this. This is only a guess of Taecyeon post on his cyworld.
Tags: 2pm, Cyworld
Share
Previous articleNext article