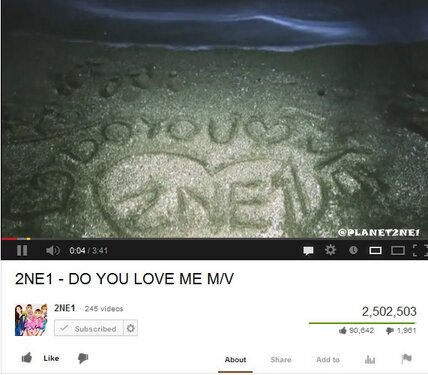 2NE1's music video of 'Do You Love Me' has reached more than 2.5 million views after it was released on August 7 at Youtube channel.
More than 2.5 million netizens caught themselves curious of 2NE1's recent single from their comeback album causing them to click the button. 'Do You Love Me' is the second title track of 2NE1 after the successful 'Falling in Love' release in July.
There so much to expect from 2NE1 as it was announced that 2NE1 will promote new song from their recent album every month from July to October as part of their promotional activities.
Watch the MV again and make it a billion!
written by: loveluytakyo@dkpopnews.net
SOURCE: @Planet2NE1
Tags: 2ne1, Do you love me, Falling in love, Mv
Share
Previous articleNext article