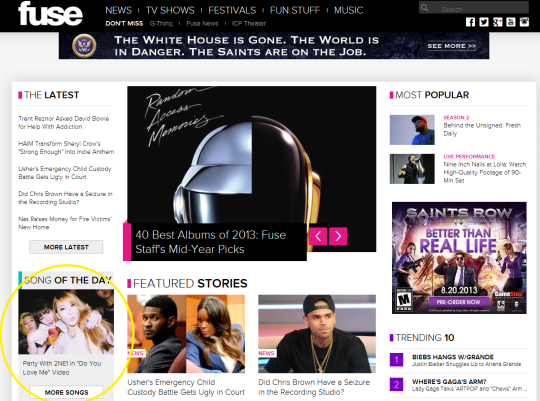 Another recognition for 2NE1 was given to them as their MV for their newest song, 'DO YOU LOVE ME', was' featured as the 'Song of the Day' on Fuse TV.

Their latest song ‘DO YOU LOVE ME’ reached top 6 on iTunes main single chart and topped songs in Indonesia, Malaysia, the Philippines, Singapore, Taiwan and Vietnam.
After making an appearance on M Countdown on August 8 and KBS’s Music Bank on August 9, 2NE1 will appear on MBC’s Show! Music Core on 10th and SBS’s Inkigayo on 11th to promote ‘DO YOU LOVE ME’.
Fuse is an American national television network of music which features original series and specials, exclusive interviews, live concerts and video blocks.
written by: loveluytakyo@dkpopnews.net
SOURCE: daraparkph
Tags: 2ne1, Do you love me, Fuse tv, Mv, Song of the day
Share
Previous articleNext article